Jérémie Legrand in the media

Documentary entitled “history of the violin” directed by Simon Barral-Baron

Violinist and luthier by passion

In the discretion of his studio on rue Camille Rocher, Jérémie Legrand completes the sculpture of the top of a violin. An instrument that he will give at the end of the month to “a young 19-year-old violinist, the…

one of the most gifted of his generation! Luthier, Jérémie became one out of love for the violin: “I started playing at the age of five. I quickly took a liking to it. I was encouraged by my parents and enjoyed playing for them.
His early vocation, he owes it to this passion: “At eleven years old, during a course led by Ivry Gitlis, I heard about a school where they learned to make violins. It was the click! At 15, he was one of eight aspiring luthiers selected to join the Mirecourt school. He builds his first violin, the one on which he continues to play. Five years later, they will be two to obtain the diploma. At the same time, Jérémie completed his studies at the conservatory, before abandoning classical scores in favor of traditional Irish music. A new passion that will lead him, after a year of training in restoration in Paris, to set up his workshop in this country. The “ideal sound” This dual training is a real asset for this perfectionist in constant search of the “ideal sound”. A quest that begins the very moment he chooses Bosnian maple or red pine from the Dolomites on site, which will later be cut and shaped “entirely by hand”. Some two hundred hours will then be necessary to develop a violin, twice that for a cello. Sometimes, a dozen more to perfect the setting. A beautiful work that will continue in the hands of the musician.
It is his personality that will give the sound its roundness and depth. The confidence also that he has in his instrument. Violinists around the world have already placed their trust in Jérémie: his instruments feature in the greatest orchestras, such as the Berlin Philharmonic Orchestra. 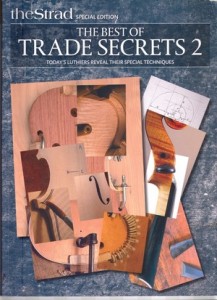 Article published by Jérémie Legrand in “The Strad magazine”